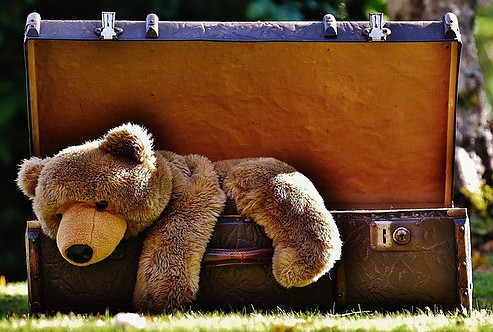 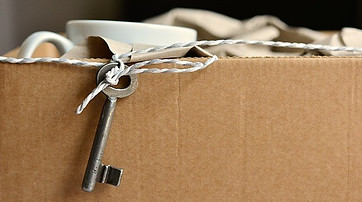 The first and best piece of advice I can give is DON’T DO WHAT I DID! …..stupidly I left the decluttering until I was moving house (so much for forward planning, which I thought I was pretty good at BUT apparently not!) There was no wriggle room for me and I mean absolutely NONE. I had a deadline and no choice but to meet it.

I never really thought I was collecting clutter. I kept stuff because I had a guilty pang at the thought of getting rid of it. Maybe it would be handy later or a waste to throw it away. The hardest one of all though is hanging onto something for the memories it holds.

I was shocked when I started, the house was only small and didn’t look cluttered. I kept it tidy and neat, it was cosy but not over busy (for me anyway). The problem was all of the hidden places, out of sight out of mind, as they say. Every draw was jammed full, wardrobes were bursting, I couldn’t get into the loft, in fact I’m amazed the ceiling didn’t collapse on me while I slept under the weight of “things I couldn’t do without….but really could” and the garage was a storage shed.

I spent a manic 3 days running to and from the tip and charity shops with things I barely had time to sort through.

My stress level was out of the roof and was added to by the fact that I don’t like waste. I hate the thought of filling all of those landfill sites (which I seemed to be accomplishing all on my own!).

To this day I can’t remember half of the stuff that went. I’m sure a lot more of it could have gone to charity shops or have been disposed of in a better way.

William Morris had the philosophy “Have nothing in your house that you do not know to be useful, or believe to be beautiful.”

I like it but I would add “and a few things which hold special memories” but that’s it! It’s a shame I hadn’t found this quote years earlier.

So the moral of the story STOP HOARDING SU. I learned my lesson well …. in the end.

After the move I felt great, released if you like. I vowed I would never get myself into that pickle again. Although I still have “accumulation tendencies” I try to keep myself in check.

Now I happily declutter regularly and have learned how to declutter without feeling guilty. I’ve picked up methods and ways of thinking which keep me focused.

So if you’re having a problem with bulging cupboards but don’t seem to be able to get rid if anything here’s what I learned that may help to you too.

Know why from the start

Because you’re going to feel GREAT. Oooooh I love opening those beautifully neat draws and being able to find exactly what I’m looking for. I’m not a neat freak but at the same time can’t stand it when I can’t find what I’m looking for. Neat uncluttered draws, cupboards, wardrobes are a sight to behold (even if they don’t stay that way). In fact I open them twice sometimes just to admire them ( It’s a bit sad I know….but honestly I’m fine with it) Knowing how fabulous you are going feel will keep you going.

When it gets hard letting go of things, focusing on the end result helps you get through.

If you give yourself time you can properly sort through things.

The money was wasted when you bought it. Now that jumper you bought but have only worn once in three years, the cushion you bought but never got out of the cellophane because it was the wrong colour when you got it home or the book you are never going to read is just clutter. It’s alright to let it go to somewhere it will be used.

Start with the stuff that doesn’t have sentimental value

It’s crazily hard to let go of things with memories. If your an old sentimental you could end up keeping way to many things. The really special stuff gets crowded out by all the not so special stuff. Let the things that truly hold meaning shine by getting rid of the less important. It’s a hard one, I know but be firm with yourself.

Starting with none sentimental stuff gets you in the swing of letting go. Hopefully you will already be seeing the benefits of your work by the time you get to the difficult items and be more able to decide what you really want to keep.

Having a memory box (mines a suitcase) can also help you limit the amount of things you keep. Only special things find a place in there. The size of the box is up to you.

Find a place for things – Don’t be tempted to stuff

You are not going to get rid of every thing. A minimalistic lifestyle is not for all of us but it is important to find a home for everything. Hey that doesn’t mean if you can squeeze it in that draw it’s fine to keep it, you’re decluttering remember. If that draw you are trying to cram that extra t shirt into is stuffed what needs to go?

Finding a place for every thing will make life so much easier. Organising saves so much time in the long run. There are so many great ways to help you organise but I’ll save that for another time.

Being organised is also going to stop you buying things twice (I can’t be the only one that has done this…..can I?) On my mass tidy I found I had bought the same books two and sometimes three times!

A gift doesn’t have to be forever

The lovely thing about receiving a gift is the sentiment behind it, not the gift itself although this is lovely.

Acknowledge this and it’s much easier to let them go especially if they are going to be appreciated in their new home.

My stuff has feelings – No I haven’t totally lost the plot!

In my sane mind I know they haven’t got feelings………I really do…. BUT sometimes a little voice creeps in (usually as I’m hovering over the bin) Aren’t I good enough anymore? OR Haven’t I served you well? accompanied by me replying OOOH it’s a shame to throw you away. STOP!!! It’s an object, I already made my mind up….. That’s why the bin lid is open just drop it in!

There’s no such thing as a junk draw 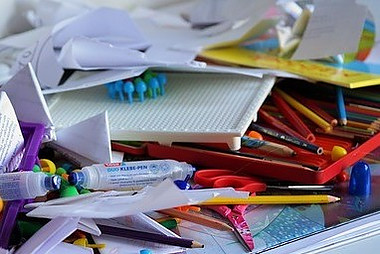 If it’s junk it has no place being in the draw. If it’s not junk there is a place it belongs. Don’t be tempted to keep a draw for bits and bobs. Before you know it will be a full-blown junk draw all over again.

And Finally Be Greatful

Let it go and be thankful for what it did for you while you had it.

And that’s it. All the things I’ve learned to keep me clutter free (or as close as I’m ever going to get) without the guilt.
There must be so many more helpful tips I haven’t even considered. If you have a gem you have to help us on our way drop a comment in the box below, I would love to hear them.