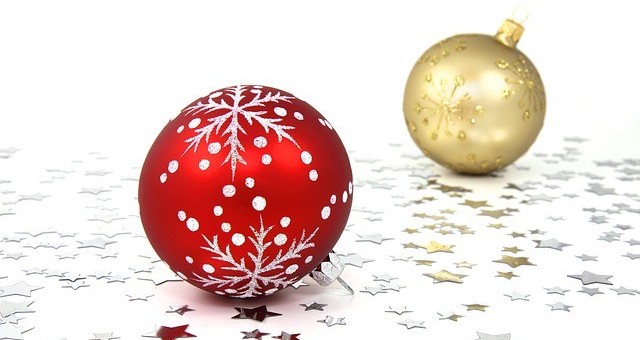 As I am sitting here the rain is pouring down the sky is grey and it really does look bleak outside. Not exactly the picture postcard Christmas scene. As an added bonus I was shocked into the day with a freezing shower and no heating (brrrrrr…. ……there’s nothing like a broken boiler to kick start you into action)

So you may think this is going to turn into a rant about how depressing the winter is or how Christmas has turned into an over commercialised stressful holiday, where the true meaning has been diluted or even lost, replaced by excessive consumerism, greed and overindulgence. But you couldn’t be more wrong.

I LOVE CHRISTMAS! The twinkly lights, the carols and cheesy Christmas songs, father Christmas on his sleigh driving around the streets, friends dropping by to say Happy Christmas (and of course indulging in a Christmas tipple or two……..which can turn into a bit of a party) the recipes that get pulled out only at this time of year, the smiley faces (I ignore the grumpy ones, or just pretend they are smiley…. even if it makes me look a little crazy) It’s an amazing time of year and I can’t get enough of it.

So did Christmas get started yet? Oh yes, for me it started on the first of December when the town celebrated with a lantern parade and switching on of the Christmas lights. I have gone every year since moving here but this year was truly magical. It’s not the biggest or the most elaborate but holds such charm and there is nowhere else I would rather be. I’m not sure who organises everything but who ever it is they do an amazing job and I’m so grateful for all the hard work they put in to making this such an enchanting evening.

There’s a workshop for the children where they sculpt and create lovely paper lanterns….some almost as big as the children…. and then light them with tiny lights which glow against the dark night sky. 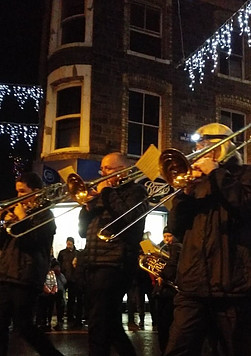 The parade led by a brass band processes through the center of town finishing at the tree where the band leads the carol singing.

Now remember I’m in Wales and it’s totally true that the Welsh really know how to sing and I have to admit as an English singer I feel completely intimidated, especially as some carols are sung in Welsh! But I give it my best shot and pray that those next to me are singing so loud they can’t hear my out of tune, badly pronounced rendition. 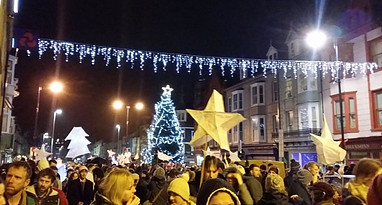 After a small prize giving presentation for the winning lantern comes the count down and the switching on of the lights. Although we all know they are exactly the same lights as last year they are still met with oohs, aahs, clapping and comments of Isn’t it lovely! and it really is!

Then meandering around the festive stalls where local produce and gifts are on show children from the local primary school choir sing beautifully and free mulled wine is given to all. 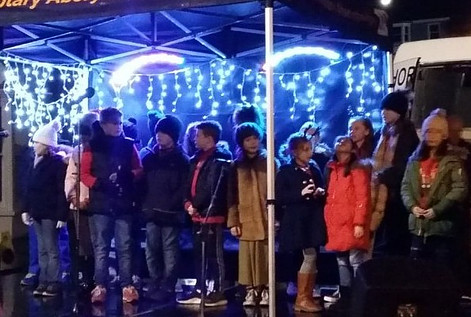 Sunday saw the arrival of my parents with a boot stuffed with presents ready for the prezzie swap.

This was the last time we would see them before Christmas so there was great excitement in our house on Sunday morning.

In the afternoon we all went for the ritual annual tree picking.

Everyone has to agree it’s the most perfect tree EVER, which is not as easy as it sounds, we all have strong views on what perfection is.

Being the Mom you’d think I would have the final say…….not in our house! It’s my own fault, from my girls early years I made it clear all our opinions were equally valid and so……. a voting system evolved.

What was I thinking! I get out voted so often it’s unreal!

This year was easy though. Almost as soon as we walked in Charlotte spotted it. The most beautiful something or other pine (I can’t remember the variety) we had ever seen. Even all the way down, no gaps, lush greenery and the perfect spread, no vote needed.

Happily we carried it to the car, then it became blindingly apparent there was only going to be room enough for four of us and the tree. Well obviously the tree took precedence. Who ever got left behind the tree was going in.

After much pushing, shoving and wiggling we managed to squash Hannah under the tree which stretched from the boot over the back seat and through the gap between the front two seats and set off home with only an arm and leg protruding from a mass of greenery. Good job she’s a 24-year old tiny dot!

Monday mom and dad left again with a boot full of prezzies from us to the rest of the family.

A few hours later the girls partners arrived with yes you’ve guessed it more prezzies and are staying for a fun filled festive week.

Now don’t get me wrong here it sounds as if it’s all about the presents but that’s not really true. I do love buying (or making gifts) for my friends and family and get so excited opening mine on Christmas morning, but Christmas is so much more than this for me. It’s about the love behind the gifts whether large or small, the community spirit and goodwill that flows and the magic that never fades even when your children are fully grown.

Yesterday saw my first attempt at making Advocate. It was surprisingly easy and so good it doesn’t stand a chance of lasting more than a few days. I got the recipe from seriouseats.com and used only Vodka no brandy, this way it stays that lovely yellow colour.

If you want to have a go yourself here’s a link to the recipe. You can’t go wrong with it and is surprisingly quick to make.

Tonight we’re venturing to the outdoor Ice skating rink which is making its first appearance at Aberystwyth. I have to admit I WILL NOT be venturing onto the ice.

Turns out the phrase “I saw stars” is actually true as I definitely saw a whole galaxy as my head hit the ice before the embarrassingly unconscious moment when I was carried off.

So now I am a very happy observer. I know they say you should get back on your bike straight away if you fall off BUT NO! This is one bike I’m happy NEVER to ride again.

And now I’m off to cut the holly and Ivy and get busy dressing the rest of the house with massive amounts of greenery, gold ribbon, red berries and Christmas sparkle.

I send you my very best wishes for the whole festive season.