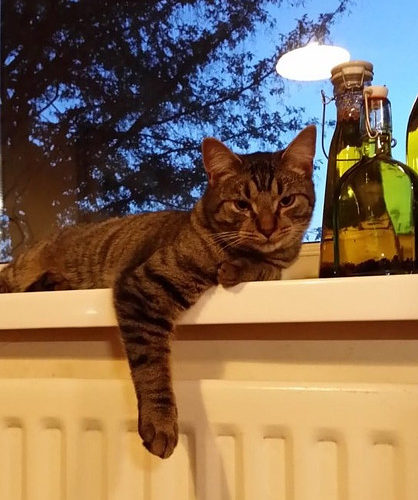 I can honestly say it took about 5 months for Darwin to find his happy place. You know the place where you can feel at ease with yourself, when every little thing doesn’t stress you anymore, when life becomes easier and you can enjoy the things around you. For Darwin play time was his saviour.

In my last post I explained how important play is to cats. For Darwin, it bought about a complete change in the way he viewed life. The more we played the more confident he became the more he owned his space and the more he trusted us, (and even liked us). He moved himself out of the utility and into the living room! He did it on his own too….yep one day he just decided that it was more fun where we were.

I brought his igloo into the living room so that he still had a hiding place …… he didn’t use it once! He chose an open basket and claimed a chair which was not used by us very often, were he could sit and watch us from a distance (I’m sure from the look in his eye he was judging every move we made) and lounge on the windowsill.

Every opportunity we got we played!

I’ve even got sofa play down to a fine art….you know the play I’m talking about right? It’s when you are shattered or there’s your favourite T.V show on but your cat has decided now is the exact right moment for getting rid of all of their energy and you have been chosen as their ally and partner in crime! Yes it’s that aggravating time when play is the very last thing on your mind!!!!!! You’ve already played for what seems most of your evening but in reality it’s only been an hour on and off.

It has to be done though, if you are going to get any peace for the rest of the night and, have a happy cat! Your arm goes into play mode, dropping over the arm of the sofa, holding a wand and using the cat tunnel as a prop to play hide-and-seek while the rest of you stays focused on slumping in the sofa for some coach potato time! On mastering this technique, and yes I really have mastered it, your cat can have as much fun as when you are darting around and fully engaged.

The Best Ways to play with Your Cat

So when it comes to cat play variety is truly the spice of life. Play has become part of our everyday routine and finding new ways to engage Darwin is almost as much fun as the play itself. I’m currently cutting holes in cardboard boxes to make play boxes……I’ll let you know how it goes.