If you have read stage1 and stage 2 you will already know that socialising our beautiful Darwin is a long slow process made up of tiny steps which if you blink you will miss. If there was anything Darwin was teaching me it was patience. It’s not that I’m impatient but you know when you’ve made your mind up about something you just want it done quickly! and this was not going to happen.

So we’ve just got the stage in his rehabilitation where I can get up off the floor (hallelujah!) and begin to interact more directly with him. He was still spending his entire day in his cat igloo and only coming out when the house was deathly silent. The only way I knew this was because he was eating and using his litter other than that there was no sign we had a cat in the house. It was time to move him on and speak to him in a way he could not misinterpret.

It’s all in the eyes.

Well that’s not strictly true. It’s all in the eyes, the tail, the ears in fact the whole body……but a good place to start is the eyes. As soon as he began to look at me instead of trying to become totally invisible it was time to attempt the cat eyes. Yep it’s a real thing. Cats have a whole language expressed through their eyes. If you are not aware what they are here are the ones that I know;

If you know of anymore please let me know

So day one of stage 3 again found me quietly in the utility, sitting waiting for Darwin to catch my eye. As soon as he did I did the slow blink and then looked away. I knew he understood me as he does cat so well…. but was he impressed? Not on you life! He looked back with the unblinking stare then looked away! Not a good sign you may think, but I preferred to look on this as a positive step. Yes he still saw me as a terrible ogre about to eat him alive….he’s not the first by the way…. but he at least had stared first then looked away! This told me he had gained a little confidence and his looking away was a sign he really didn’t want to be confrontational but was not ready to be friendly. A few minutes later I tried again. When I turned to look at him he was totally transfixed on me, …..it was a bit freaky I’m not going to lie but I went in again with the slow blink. I would love to say he returned it but he didn’t. Every time I looked away he returned to starring (not the blinking stare you in my gang stare, more the “I’ve got my eye on you in case you get any closer” kind of stare). After repeating this a few times and then just sitting quietly in between and ignoring him I left to give him time to relax.

I did this at about hourly intervals but wasn’t clock watching so this is just a guess. It didn’t take many attempts before he returned the compliment and slow blinked right back at me! I couldn’t believe it. He actually showed me a friendly gesture! Now don’t get overexcited here, he still didn’t trust me but at least he was showing signs of wanting to.

It carried on like this for about a week with me introducing the nod when I entered and then the yawn after I had been in there for a while. Gradually he became more relaxed with me in the same room returning the gestures about 9 times out of 10. Sometimes he even wriggled around making himself comfortable. It was a massive success which I would like to take all of the credit for but I can’t. Every evening when Charlotte and Hannah came home from work they spent time with him doing exactly the same with him as I had done in the day getting him more and more used to human contact. After a day at work sometimes the last thing you want to do is sit in the utility with a cat that definitely doesn’t want you in there but they carried on never the less with never a sign that they wanted to be doing anything else.

The day he stretched his front legs out giving a strong indication of relaxation (still in his igloo at this stage) it was time to move to the next step.

Time to be a temptress 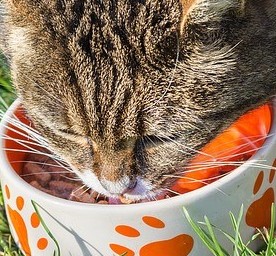 I started by putting tempting treats on a long spoon and holding the spoon at the entrance to the igloo. He looked at it, he sniffed the air, he stretched his neck to get a better look at this point I got excited thinking I’d cracked it then…..he promptly pulled back in and totally ignored it. Ummmm this was not going as planned! I tried everything from fresh chicken and fish to shop bought treats but with no luck. After a few days it was time to change tactics, I stopped feeding him at night when he was comfortable and put his food down in the morning close to the igloo but far enough so that he had to step out to reach it. Sure enough it worked. When I wasn’t in the room he was coming out in daylight to eat. At this point I could put my worries aside that he was not in fact a vampire cat. I gradually moved the dish further away an inch at a time and carried on trying to tempt him with a spoon at intervals. It seemed to take an age, then one day when I was beginning to lose hope he gingerly poked his head out and took a sniff, then a lick and after a few more attempts he took his first bite. We were getting somewhere. Time to move on…..

After a couple of days when he had taken food regularly from the spoon I decided to leave the door to the utility open so that he could get used to me moving around. When Charlotte got home we were preparing tea and as usual half-way through realised that we were out of half the ingredients (I’m not as organised as I like to believe) so we popped down to the shop. We could only have been gone 10 minutes and we were back and merrily chatting and prepping when Charlotte suddenly went silent and pointed to the pressure cooker. Darwins tail was sticking out. he had dared to venture out in the short time we had popped out and unfortunately for him was caught short and must have darted into the space between the pressure cooker and the fridge. We carried on as if we hadn’t seen him, we didn’t want to spook him further. After a few minutes he took hold of all the courage he had and darted back straight between us to the safety of his igloo, but he was out and getting braver by the day. It didn’t take him long after this to start moving around the utility EVEN WITH THE DOOR OPEN! This is when we discovered his Ninja tendencies. He was stealth like. He could move around from his igloo to his cat fort, eat his food and even use the litter without a sound. If I was lucky enough to observe him he was like a panther. His haunch down low and shoulders high, every step slow and focused. Honestly he was mesmerising. I could really hold hope at last that we could socialise him and help him to be the best cat he could be.

I knew soon I was going to have to get him to the vets for his vaccinations so the next step (and it was a big one) was getting him to trust me enough to let me pet him. Find out how I got on in my next post.