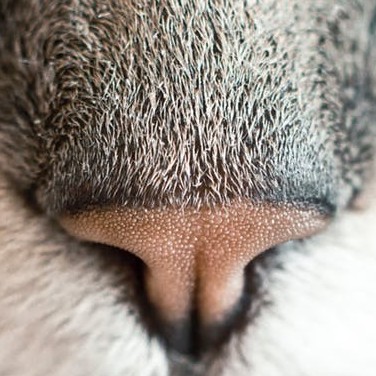 I know…… learning to be a cat sounds nuts! Out of all the things I could be learning like the guitar, Tai Chi, juggling, the geography of the world ( which I am sooo abysmal at this it’s unbelievable), computer coding…or maybe I should start with basic computer skills, Survival skills in the wild ….not that I’m ever going to be so far in the wild I need them… but hey… they are good to know…just in case and a new language, all of which are on my to do list by the way, I just have to get round to them. 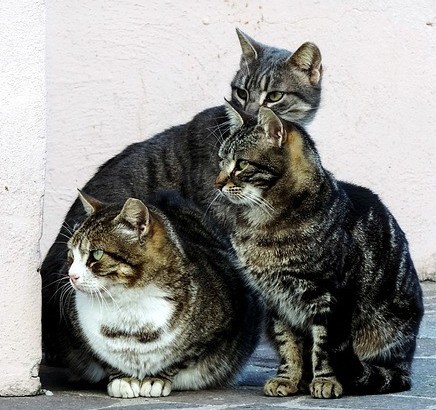 When you think about it I am actually learning a new language, it’s just the only ones who will understand me are the feline community, so throw me in a cat colony and I will ace it!

Well that’s what I’m hoping anyway because Darwin (our foster cat) made it perfectly clear he didn’t have a clue what this human thing is all about.

Everything, and I really do mean everything, that smelled of human was petrifying for him. He had no idea when we were being friendly and read everything as threatening. Check out my post “they told me he was scared” if you want to find out about Darwins arrival and just how unbelievably terror-stricken he was on that first day.

The CP volunteer who had held him temporarily before his transfer to me had already done a wonderful job. She had established that the normal techniques for bringing a cat out of his shell and building his confidence had not worked with him, and she had tried them all.This was great information for me, I knew from day one I was going to have to learn his language to communicate to him in cat talk. So where to start……….

This utility floor is a cold,cold place

Territory and owning territory is super important if you are a cat. Initially he needed to own the utility. As it was he didn’t even display any signs that he owned the bed he was hiding in. His whole body language was just plain scared. He desperately needed to gain some confidence.

Getting him used to me being in the same room as him without me posing a threat was my first target. To achieve this I needed to be in the room but as low as possible, giving him the high ground so to speak, preferably I needed to be below him without blocking his escape route. He didn’t make this easy as he had chosen the cat igloo on the floor in the corner as his safe place. Ummmm the worst position in the room as far as I was concerned. It was cosy and warm with a squishy cushion unlike the ceramic tiled floor which is flipping cold when you lie motionless, like a plank with your cheek pressed against the ground staring at a blank wall trying to be as small as possible! 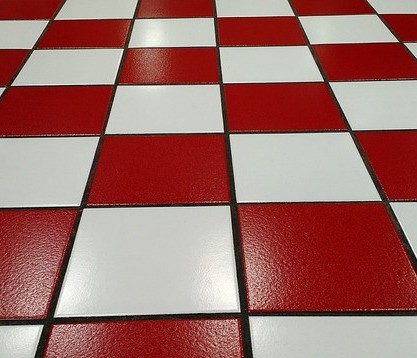 Yep, and this is what I did for several weeks! I looked really weird and felt pretty stupid too not to mention the frost bite I felt I had acquired in my left cheek, but I had to be in the least threatening position I could be and as far as I could work out this was it!

So Five or six times a day I would enter the utility quietly letting him know I was coming in by speaking in a hushed and gentle voice then lie flat on the ceramic tiles pretending that I knew he was there but I was going about my normal business (as if this is really my normal business) without bothering him.

I lay there from 5 to 15 minutes at a time without speaking or looking at him and then quietly left and even then he was shaking and hypo ventilating, which is heartbreaking to see.

It took about two weeks for him to show signs that he was beginning to accept me lying in this strange position on the floor … I can’t tell you how relieved I was. I caught him looking at me when I turned my head more and more often. Yeahhhhh I was so excited over such a small thing but honestly at some points, when I was in my comatose floor position, I doubted that I was ever going to make any headway with him. It was time to move to the next stage and none to soon, but I will get to that in a while. There were several other key things we did at the same time as me pretending to be a non confrontational cat sleeping on the utility floor.

Leaving my scent behind

No I didn’t do anything weird! I know that cats have 200 million odour-sensitive cells in their nose that’s a massive 195 million more than us! 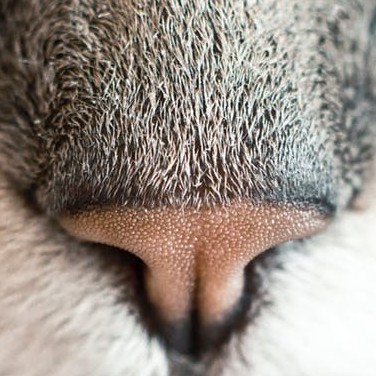 It’s their major sense and they use it for everything from assessing their environment to choosing what they eat. So getting used to the way we smelled and being able explore our scents while being stress free was important in the confidence building process. I simply left clothes we had worn around the utility. Darwin could then start to get to know to us even when we weren’t there.

I also left him plenty of scent absorbing surfaces for him to spread his own scent on to claim his territory. Things like cushions and blankets etc. These could also be moved later to introduce his scent to the rest of the house when (if ever) he became confident enough to leave the safety of the utility .

While we are talking about the cats biggest super power…their sense of smell…. I had been given a Feliway and a Pet Remedy plugin previously by Cats Protection. These products replicate the pheromone cats release from their cheek glands when they are feeling relaxed. The cats brain then kicks in with the feeling that everything’s OK and they are able to relax.

I’d only ever used these once before when we had moved our old cats to their new home. They seemed to work then and resulted in a fairly uneventful journey so I decided it definitely couldn’t make things worse if I gave them another go with Darwin.

I chose the Pet Remedy Plug in as Annabel (CP volunteer extraordinaire, who gives fantastic advice on all things cats, and many other things I have now found out) confirmed this to be the most effective with her cats….. although it definitely had the pong of smelly socks……And she wasn’t wrong!

I plugged it in and promptly forgot Annabels very accurate description.

For a week after, every time I walked into the kitchen I was accosted with an aroma vaguely drifting on the air that I couldn’t place…. but wasn’t keen on. Don’t get me wrong it wasn’t overpowering or terrible…. but it was definitely there! After much smelling of anything and everything in the kitchen and the opening and closing of every cupboard at least 100 times in a vain attempt to locate the source of the offending smell, I suddenly remembered Annabel saying “it works really well if you don’t mind the smell”! Mystery solved! It seemed to be having a positive effect so I resigned myself to the fact, for at least a month the kitchen and utility would have to be fragranced with the air of cheezy socks!

Oh this was such a hard one for us!!! Cats love peace. Loud noises startle even the tamest of cats. It’s as if noise is an affront to their majestic nature. I wouldn’t describe us as loud… I’d say we are exuberant, happy, excitable… O.K we can be loud. Getting up and out in the morning is accompanied by music, singing and occasional dancing, meal prep is accompanied with music, singing and occasional dancing, cleaning the house is accompanied by…. well you know the rest. It’s a happy house, what can I say. 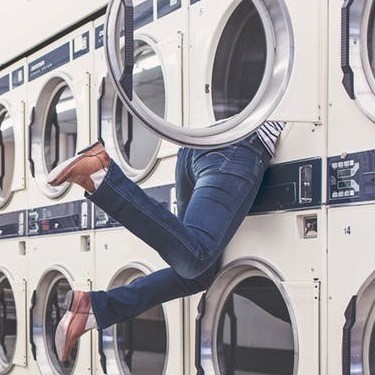 The creaking of a door sent Darwin into a mad panic, major adjustments had to be made. We changed the music to classical, played quietly, talked in gentle quiet voices and turned the T.V down. The hardest thing of all though was the washing machine issue! Obviously the washing machine is in the utility and it’s not a quiet machine!
It was way too much for Darwin as we found out after using it for the first time with him in there.
There was nothing for it but to stop using it. Yes you heard me right, it was back to the good old days of washing by hand in the sink or bath and the occasional visit to the launderette. We thought it would only be for a week or so but no such luck, it was a whole month before me and my washer womans hands were reunited with the washing machine. And oh how I love that machine with a new passion  after going without it for what seemed an eternity.

Did your mom ever tell you it’s rude to stare?

This was the last thing I wanted so when the beautiful moment happened and Darwin had plucked up enough courage to actually look at me I had to resist the massive temptation to have a good look back at him.
We are now two weeks by this stage and I hadn’t had the chance to see who was living with us. I can’t tell you how much I wanted to, but for once in my life I was determined to go slow and not push it. I kept reminding myself there is no pace but Darwins pace. Anything else would just not work.
So me being the very polite cat that I was, did the slow blink and turned my head away. I’ll be writing more about this soon but just for now all that you need to know (if you didn’t already of course) is that in cat language I am being friendly, non aggressive and showing I’m relaxed. If the cat returns this they are also showing trust and being friendly. There was not a chance it was going to be returned at this point but at least he would understand me and there was at least some communication between us.

It had been a long two weeks!

So we were now ready for the next stage. It was obvious the whole process would be painfully slow. I needed it to be the least traumatic it could possibly be. There is no push at this stage. Pushing boundaries comes later…..much later but at least I could get off the floor and this made me more than happy.

The first two weeks were without a doubt the most exasperating and the pace picked up after this. The first break through was the hardest and although at this point it looked as if I had made no progress I knew we were going to get there. The hypo ventilating had stopped and the courage to look me in the eye was a massive step forward for him.
I was really excited to start the next part of our journey to help him be the confident and happy cat I knew he could be.

In my next post I’ll let you know how we discovered Darwin the ninja ghost cat.

I’d love to hear any of your cat success stories so please feel free to leave them in the comments box below.
Su x