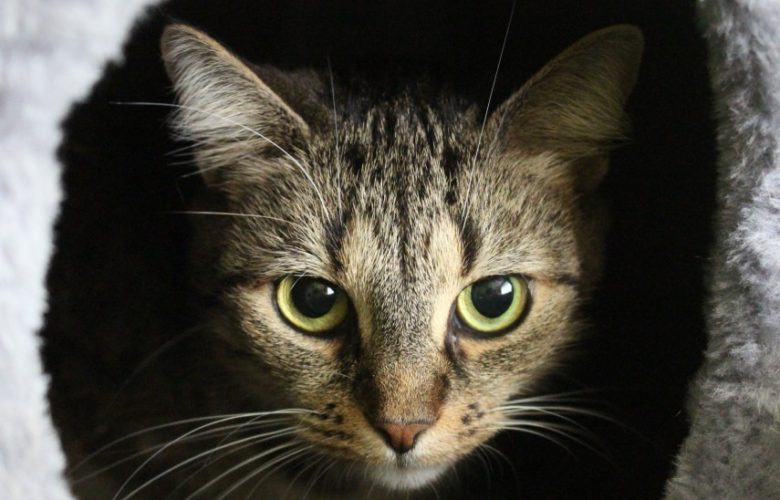 As the vet visit loomed even closer I knew it was time for me to attempt to get Darwin used to “the human touch”. As it stood I had never even stroked him let alone picked him up and put him in a carrier. Remember at this point he now ventures out in the day but as soon as he senses anyone near he darts straight back to the safety of his igloo. 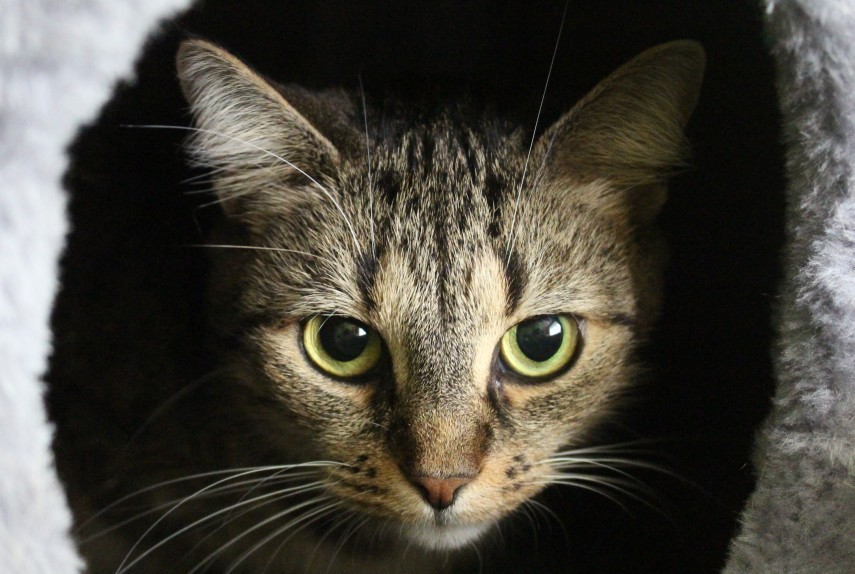 There was no way, brave as I am, and as much as I was convinced he really was a gentle cat, was my hand was going inside that igloo!

I was pretty sure he was full of nervous energy and fearful stress which had absolutely no outlet. The one thing I was certain of was that it was not going to be my hand he released it on.

I needed him out in the open getting rid of his nervous energy in a safe and fun way for him and me! The more he associated me with good things the more likely he would trust me and then maybe ……..just maybe he would let me pet him. So play was my next step.

Why Cat play is so much more than just fun

Exercise – This is especially important if you have an indoor cat. It is recommended a minimum of 2 sessions a day for at least 15 minutes. If you have played properly your cat should be slightly panting, they will then have had a good workout.

Boredom – Yes your cat can get bored. Although they love sleeping, relaxing and living the life of luxury, boredom creeps in when they have nothing to do. This can result in behaviour which is misinterpreted as “naughty”. It can present itself as aggression, destructive tendencies, excessive vocalisation or lack of confidence.

All that built up energy has to come out somewhere. Give them something to do and they will not have to find their own amusement (some of which you may not like!), after which they can return to the relaxed, pleasure seeking, majestic creature we all love.

Confidence building – Especially important if your cat like mine is a great big scaredy cat. Encouraging your cat to play gives them confidence that the area they are in is safe. Their minds become focused on the task and before they realise it they are out from their hiding place. Getting them out in the open and having them enjoy being there will make them realise “hey it’s not so bad out here”

Expression of natural behaviour – Just like as us cats are happiest when they can be themselves. They love to stalk, pounce and kill their prey. 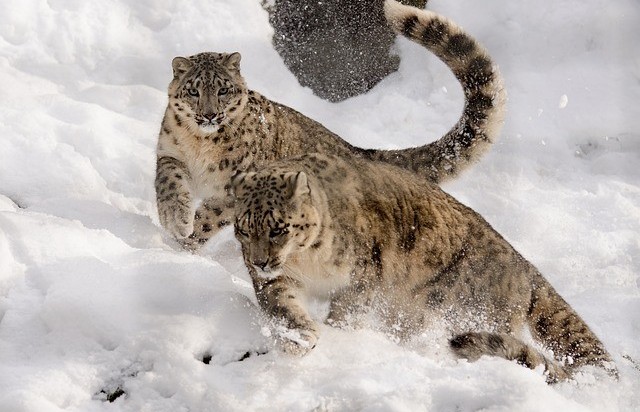 Giving them the opportunity to express their true nature will result in a happy, fulfilled and relaxed cat.

Emotional health and stress reduction – Stress could be affecting your cat for any number of reasons, a visit to the vets, bringing a new pet into the family, insecurity within it’s environment, fireworks, medical conditions, being left alone and these are just a few. As we all know a build up of stress is harmful when left unchecked or not released. Unfortunately for Darwin it was the whole of his life which was stressing him!

In the wild when faced with a threat, the adrenal glands produce more hormones increasing heart rate, raising blood pressure and generating more blood sugar. It’s a natural defense mechanism getting the cat ready for fight or flight and serves them well in the short term when faced with a dangerous situation.

This is obviously not the case at home. What they are perceiving as a threat may produce long term stress resulting in physical illness and negative behaviour. Interactive play is just one way of relieving the buildup of stress and allowing them to let it go.

Building a bond – There is nothing better than unconditional love. Cats are clever creatures by giving them that extra time and doing what they love they will pick up on your emotions. That little bit of extra play time you give will be reciprocated and there’s nothing better than cat love.

So with all the benefits bubbling away in my brain I armed myself with an array of toys I thought would spark his interest. You know the sort of stuff I’d like if I was a cat……. a whole bunch of balls, some with bells,rattles and fuzzy bits sticking out (the more fuzzy bits the better!)crinkly ones like the shiny Christmas wrap, mice stuffed with catnip, mice not stuffed with catnip and feather wands. I started with the trusted feather on a stick and he did like it. He liked it even more when I added a crinkly ball to it.

In fact, he liked it so much he kept giving it friendly eyes! 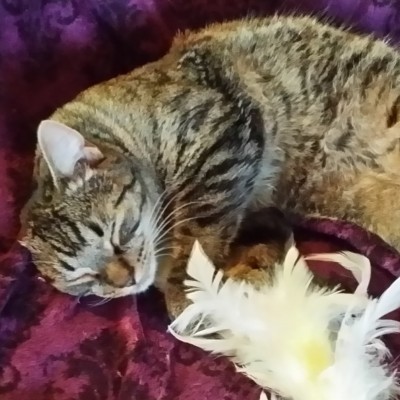 Yep he just wanted it to love him. Not exactly what I had in mind but at least it didn’t give him the heebie-jeebies.

It took a little bit of coaxing but then the paw came out!. Now he was getting the hang of it. Then the other paw! He loved swiping it, catching it, rolling with it, lying on his back and boxing it and he managed all of this inside the igloo!

Little by little over the next weeks his courage grew and he edged further and further out until one magnificent day there he was in his full glory, outside the igloo and with me only a couple of feet away! For the first time I saw him up close.

You may think at this point I would go in for the pet….but no! Jackson Galaxy has taught me well (I feel as if I know him personally…unfortunately I don’t). If you haven’t heard of him just type his name into google, he’s the most awesome cat whisperer. His knowledge of cat psychology has resulted in him being able to help even the most traumatised or aggressive cats.

So what does he do at this point…….he offers them his glasses. It may sound a little crazy but it makes perfect sense. The arm of the glasses holds your scent. It’s a bit like offering your hand for a cat hand shake without the hand, it’s saying “hi this is me…. nice to meet you”. The ball is then in the cats court. If they sniff, your on to a winner. If they swipe, no harm done ….at least it wasn’t your hand!

What did Darwin do? He sniffed, he was getting to know me. So I went in for the pet? Nope not yet. Just because he shook my hand didn’t mean he wanted a hug!

I carried on for the next few days with play and the cat hand shake. Only when I felt he was gaining confidence did I reach my hand out for him to sniff….and he did. No swipes, no hisses no pulling away just sniffing. So I went in for the pet? Nope, still to fast!

I waited…he had to make the move and there was no telling how long this would be. It was far too early to start pushing any boundaries.

After only a few more days he made the move. Gently he rubbed his cheek against my hand. He marked me with his scent. He was beginning to accept me as family.

We still had such a long way to go but I managed to get him to the vets without too much trauma and although when we got back home he was stressed, it didn’t take long (a couple of hours max) for him to get back to where we were at before we went.

At this stage we had now been fostering him for about 3 months. His progress may seem to have been slow. He was no where near fully socialised and a long way off from being ready to be re-homed. There is no way of knowing why he was so traumatised on his arrival at Cats Protection. The only certainty I had was that I was beginning to gain his trust and he was growing in confidence every day. Needless to say at this stage we had fallen totally in love with this cat, who despite what ever he had gone through was prepared to start letting us in!