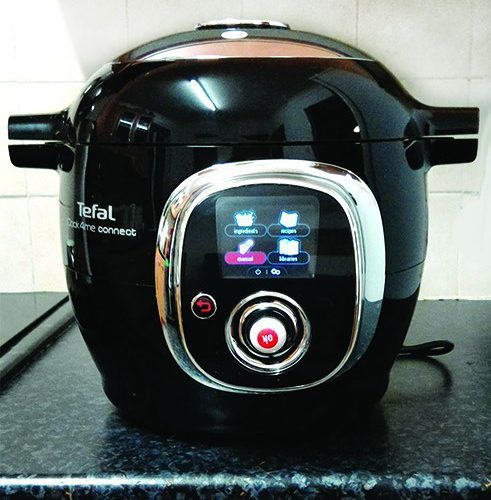 Where to Buy: Amazon

I’ve been using my Cook4Me Connect smart multicooker now for the last 6 to 7months so as you can imagine it has taken quite a hammering.

If you are like me and want to cook fresh homecooked meals without the hassle it may be for you too.

I cook most days using fresh none processed ingredients (with the exception of tomatoes and beans) as I like to give the family a healthy tasty diet. This used to mean long cooking times which was an absolute pain.

I had never used a pressure cooker before due the horror stories I had heard about them exploding or turning your meal to mush, but I really liked the idea of cutting my cooking times down.
I decided to give the Cook4Me ago as I had heard such good things about it and it was more than just a pressure cooker.

I was really pleased with the way it looked when it arrived, as it would be standing on the counter most of the time.

It has a 6 litre capacity and cooks meals easily for 4-6 people with the added benefit of massively reducing cooking times.
When I initially bought it I thought I would be using it  just for stews and soups, as it turns out the phrase multi cooker is no exaggeration. It brows, simmers, boils, pressure cooks, reheats, slow cooks and will then keep your food warm at the perfect temperature for up to 90 minutes.
The keep warm setting is a fantastic, no stirring or having to keep popping into the kitchen to keep an eye on things it just does the job for you.

It’s completely versatile and totally safe. The lid is quite heavy (which it needs to be to hold the pressure when cooking) and locks with a turn of the knob. As the Cook4Me will not start until it is properly closed there is no fear of it bursting open. It will also not open until the pressure had been totally released at the end of cooking, making it completely safe and foolproof.

I’m going to be walking you through some of my personal favourite aspects of the Cook4Me connect within this review.

It’s so easy to use

I freaked out a little initially as the technology looked quite intimidating, I’m not great with tech and gadgets, but there really was no need!
When you switch it on it guides you through everything at the push of a button.
The menu is simple to navigate by turning the dial then pressing, it really is as easy as that.
It will take you step by step through the recipe of your choice or if you weigh your ingredients it will give you the perfect cooking time, and then do it for you!

There are pre-programmed recipes on the Cook4Me itself  and over 200 more on the app you can load from your iOS and Android devices.
The app will also make recipe suggestions based on your fridge content.
There is a start now or delayed option letting you time your meals perfectly. Meals can be put in before you go to work and the timer set so your meal is ready when you get in.
You can also bookmark recipes to save you time and organise favourites.

It never gets it wrong

The instructions are clear and simple, follow these you have a perfectly cooked meal every time.

Simply select the recipe on the screen (or app) 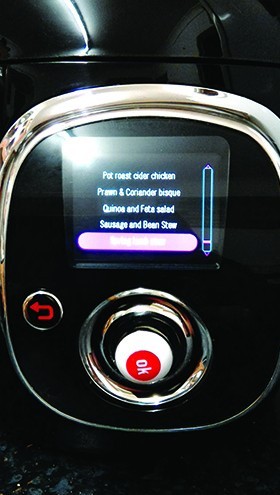 Choose the number of portions 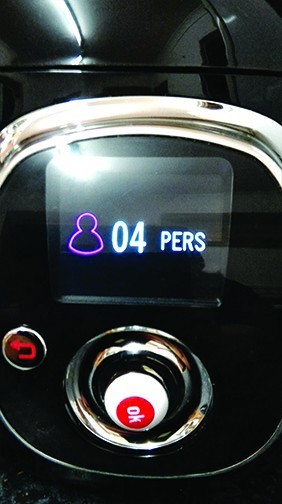 You will then be given a list of ingredients 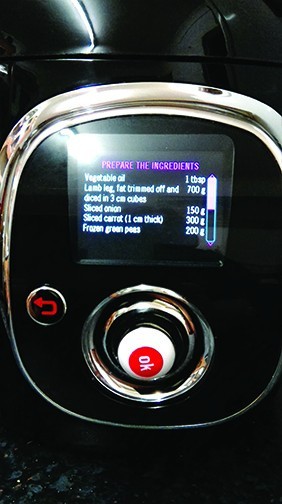 Press the button on the front when you are ready and the Cook4Me will heat up and talk you through the rest of the steps. 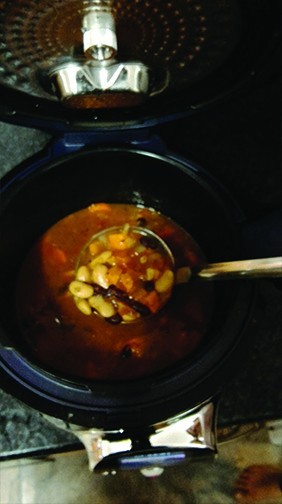 It becomes a little more tricky when you use your own recipes but if you use the data base of stored ingredients it will take the guesswork out.
By following the cooking instructions for similar pre-programed meals I ‘ve had no problems. I’ve also adapted the pre-programed recipes to my own taste.

Sauces can be a little watery and so I replace tinned tomatoes with passatta and have found if you have a minimum of 200ml of liquid you should be fine, but I will be posting some of my own recipes later to give you some other ideas.

The clean up is a cinch

You are cooking in one pot so washing up is reduced to a minimum.
The metal pot is dishwasher proof and none stick and as it doesn’t burn there is no scraping or soaking.
The inner lid detaches with one screw and is easy to clean and reassemble. After 7 months of constant use mine still looks as good as new.

It may seem a little pricey at first sight but you really are paying for the quality and a complete cooking experience. My electric cooker decided to give up the ghost a while ago which would normally be a disaster in our house!
Everyone loves good home cooked meals, but honestly it didn’t make that much difference to us. I was already using the Cook4Me for 4 out of 5 meals so we hardly missed it!

Other than my food processor it is the only kitchen utensil I couldn’t do without. It has made cooking more time efficient, the lamb curry which used to take 3-4 hours in the over now takes 1 hour.
Healthy eating is much easier, I use very little oil and all the nutrients are kept within the food and not cooked out. There is much less clean up and I love that!
It’s reliable and versatile I can use it for every thing from starters to desserts.
I highly recommend it without any hesitation
If you’re thinking of buying one and a big online shopper like me Amazon has great deals on it.

I hope you have enjoyed this and found my review helpful. If you already have one and would like to add anything I would love to hear from you. Please fell free to leave your comments in the box below.

As an Amazon Associate I earn from qualifying purchases.