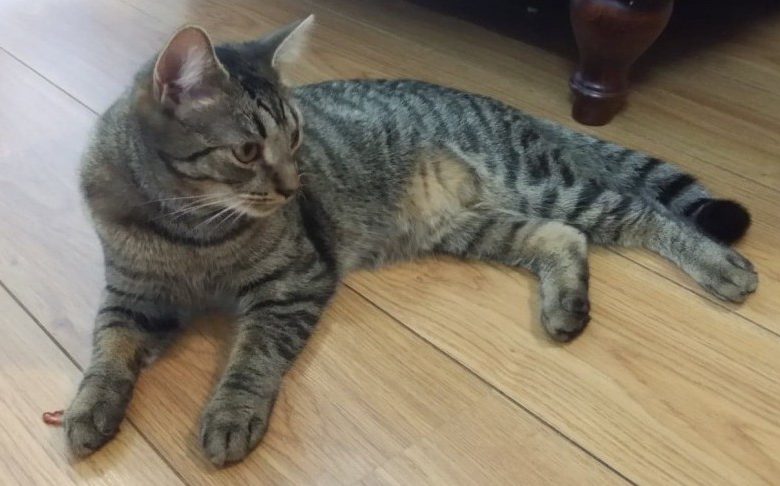 They told me he was scared, they told me he was quiet, they told me could be aggressive….. but I really wasn’t prepared for the poor baby that arrived one sunny Sunday afternoon. Helen (a wonderful Cat Protection volunteer) temporarily fostered him before bringing him to us neutered and in desperate need of socialising.

His wide eyes darted around the room through the mesh of the cat carrier while Helen filled us in on what we could expect. After looking after him for two weeks she hadn’t been able to get a good look at him. The only time there was any sign of him even being there was in the evening when every one had gone to bed and the house was silent. They would then hear him come out to play and eat. If they went anywhere near the room he disappeared. Despite all of her efforts he refused to be coaxed out and she had had to prise him from underneath a wardrobe to get him to us, unfortunately for her, resulting in blood being drawn.

He was eight months old and had been separated from his mother (the only companion he had ever known) to be handed to the Cats Protection. His trauma was blindingly obvious as he hypoventilated and searched for a hiding place from the captivity of the carry cage.

Luckily physically he was in perfect shape and had been given the all clear from the vets, that was at least, one less thing to worry about. Dealing with his mental trauma however was on a level I had not experienced before.

Settling In – Or Not!

After his release from the carrier, Darwin or, as was his name at the time Misty (his previous owners had though him to be female) shot out and into the cat igloo which was ready for him and oh boy was he fast! Maybe we should have renamed him Usain instead of Darwin, I couldn’t have caught him if I’d tried, anyway, it was pretty much what we expected him to do, it was the darkest and most enclosed space in the room. We put food and water out and decided the best move was to let him settle and get used to this strange new place he had found himself in.

I checked on him before bed and he was still in there. He hadn’t touched the food and didn’t seem to have moved. OK I thought, it’s going to take him a while but it’s all going to be fine. I then took myself off to bed feeling positive about the next day………….. I couldn’t have been more wrong.

Day 1 – Most Certainly the Worst Day

The next morning I chirpily opened the door and was ecstatic to find all of the food eaten. I peeped into the igloo, just to make sure he was alright and to my horror he wasn’t in there. In fact he was no longer in the utility!!! 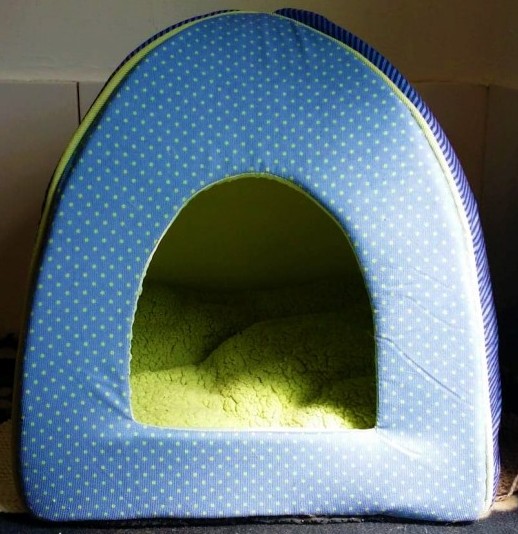 Where the heck was he, the utility is small (I mean really small) and the door had been shut! The door to the adjoining toilet had also been shut the night before and was still shut! I decided to check there first and no there was no sign of him. By this time it was me that was hyperventilating, there was absolutely no where else he could be. My heart pounded as I imagined having to explain to CP that the cat had simply disappeared into thin air! Yep it was sure to be the end of my cat fostering days………… Then I spotted the end of his tail slightly protruding from behind the toilet outlet pipe. I stared in disbelief as there was simply not enough room for him to have squeezed in there, the space between the pipe and wall was tiny, but squeezed he had. On top of that he had managed somehow to open the door then close it behind him! I gingerly approached him and for a horrible moment thought he had managed to suffocate himself in his attempt to escape. I couldn’t leave him there, it was cold, damp and the most unhealthy place for him to try and hide. On closer inspection I reassured myself he was definitely still breathing!…but I couldn’t see any way of getting him out. I gently tried sliding my fingers between him and the pipe to ease him out but there wasn’t a millimeter to spare. After 20 minutes of trying different procedures, positions and techniques I was at my wits end. I honestly thought I was going to have to phone the fire brigade…… They do rescue cats don’t they?

(Charlotte’s partner, who was about to leave after visiting for the weekend and is also allergic to cats). On hearing my panicked cry for help Krish jumped straight in……. well not quite, his first question was Am I going to get attacked?

I thought about it for a minute, I knew full well there was the distinct possibility he could come out of this with hands and arms looking as if they’d had an argument with a shredder, especially as Darwins claws had been clipped precisely because of his tendency to scratch!

Should I tell him?

I have to admit, I considered telling him that Darwin was a softy and there was absolutely nothing to worry about…… it’s OK though my better judgment kicked in and I explained there were no guarantees….. he may come out of this a mangled mess. He jumped in anyway like a true hero. He squeezed into a space I couldn’t get my left leg into and somehow managed to get a firm grip on some part of Darwin (I didn’t ask which part) then gently eased him out as I squashed a cushion into the emptying space to avoid him bolting back in.

I have never seen such a petrified cat in the whole of my life. His eyes were dilated, he was hyperventilating …again…and would not even look up. He literally tried to make himself as invisible as possible in the corner he had shot into.

I filled any other gaps and spaces that were no good for him to hide in and left him to calm down. I had made sure the utility had several safe and comfortable places for him to retreat to and knew the only thing I could do for at this time was to let him have the room to himself without any disturbances.

I have no idea what his history was except that he was an indoor cat and definitely not feral, the only thing I was certain of at this point was that humans terrified him to the point that he completely shut down. It was going to be a long process. He needed first of all to feel safe in the space he was inhabiting and then understand that we were no threat to him. I knew I would need to go at his pace. There was no quick fix with this and I was in it for the long haul. If you have ever had a cat that reacts like this you will already know how heart wrenching it is. It’s easy to think that if you show them loads of love and try to engage them so that they know how much you care it will help. Unfortunately this is not usually the case. Too much attention can cause “Flooding”. Flooding is prolonged exposure to a stimulus and can, unless carried out by a professional, cause extreme stress and end up making the situation worse. Leaving them alone may go against the grain but for the cats development it can be essential.

If you would like to know how I started to gain his trust without flooding him I will be writing a post on this shortly. 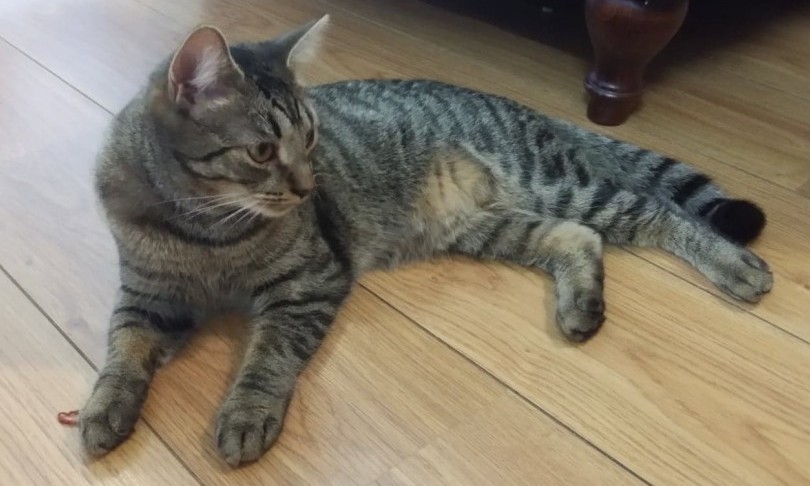 Needless to say at this point the last thing on my mind was photographing him so sorry guys the only photographs are from much later but what a beauty he turned out to be when we finally got to meet him properly.

If you have experienced anything like this I would love to hear from you. Please feel free to leave a comment in the box below.